Bandhavgarh is an eminent place in Madhya Pradesh having its own mythical history. It is even mentioned in the epic Ramayana that Lord Rama gifted Bandhavgarh to his younger brother Lakshmana. So the name of this national park is derived from Bandhavgarh Fort. The history of Bandhavgarh can be even found in books like Shiv Puran and Narad Panch Ratna.

Bandhavgarh was recognized as a national park in 1968 covering an area of 105 sq. km, which was later stretched out to include two connecting Sal forest area in 1986. Prior to turning into a national park, it was the game reserve of the Maharajas of Rewa.

No conservation measures were taken by the Government until 1968. The Wildlife protection act came into existence in 1972 when it was realized that this reserve preserves some of the best flora and fauna and that it needs protection from extinction. It was then decided that the area should be extended from 105 square kilometers to 437 square kilometers, the whole area became a tiger reserve. 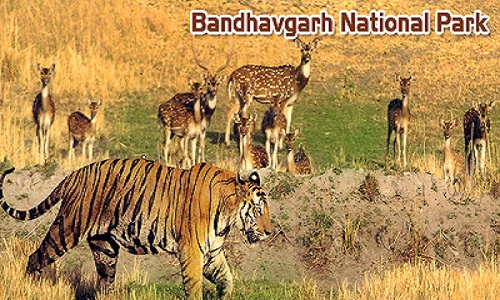 Bandhavgarh National Park is one of the reserves in India with the highest number of tigers. It is basically popular for the rich populace of white tigers. So it is additionally prominently called the white tiger domain.

Bandhavgarh is additionally well known for its huge verifiable significance. A total of 39 caves have been found in the Bandhavgarh fort. These caves are situated at Bandhini hills inside the tiger reserve of Bandhavgarh national park. On the highest point of the hill, you can see eleven lakes that serve water for human survival on Bandhavgarh fortress. These slopes and hillocks are viewed as holy places of worship by the local people and the tribes living in the area.

How to reach Bandhavgarh?
Bandhavgarh is connected by all means of transportation so it is effortlessly open by means of road, railways, and air. Bandhavgarh is situated at the same distance from the city, Jabalpur and the world acclaimed tourist spot Khajuraho. It is around 170 Km and takes 6 hours to reach from these spots. The closest airports are Khajuraho and Jabalpur, you can book direct flights to Jabalpur from Delhi. By means of railways, the nearest railway stations are Jabalpur, Katni, and Umaria. Enjoy a Bandhavgarh Tiger Safari!