The Rise of Tigers

The population of tigers started dropping around the time period of the 1940s when due to the increase in human population and hunting and poaching practices, there was an immense threat to their existence. The natural habitat of tigers was taken away by humans for the commercial and personal purpose.

India was a rich habitat for tigers. But 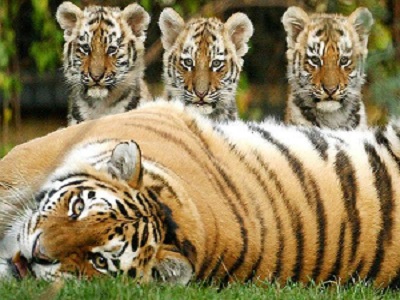 the areas where the Tigers used to prowl and rule, was used by humans for agriculture, infrastructure, and other development projects. This led to a decrease in loss of habitat for other animals like deer and antelopes, leading to the reduction in prey population too. The large territories that were home to all the animal, was now used for transportation, hydel projects, factories, and theme parks. This made the Tigers enter the villages and attack humans since there was no prey to feed on and thus the supply chain was disturbed.

The old sport of hunting down tigers, lions, boars, and other majestic animals was not only a sport but also a status symbol to boast about for the royal families. The skins of tigers were hanged on the wall or used as floor carpet. Later in the 1990s, the tiger was also used in trade. The bones of tigers were traded to make traditional Asian medicines of that time. This made poaching as one of the reasons for declining numbers of tigers in the forest areas.

The government had soon noticed that the Tigers would soon become an endangered species and thus Project Tiger was launched in 1973 with Corbett National Park in Uttarakhand being declared as one of the National Tigers Reserve. Project Tiger resettled the people who were living in the Tiger Reserve areas and gave them jobs in the National Parks so that people don’t lose their livelihood.

With the 2006 amendment in The Wildlife Protection Act,1972, the National Tiger Conservation Authority (NTCA) and Tiger and Other Endangered Species, Crime Control Bureau was introduced. After this step, there has been no turning back. The population of tigers rose from 1,411 in the year 2006 to 2,226 in 2014.

Madhya Pradesh was known as the Tiger State of India till 2017. But after the death of 98 tigers in 2017, and 26 were from Madhya Pradesh, Karnataka got the title of the Tiger state. Currently, the wildlife in Bandhavgarh Tiger Reserve and Kanha Tiger Reserve in Madhya Pradesh have 49 and 60 tigers respectively. The wildlife in Bandhavgarh has the largest biodiversity for tigers and other animals like leopards, Indian wolf, hyena, caracal cat and varied species of deer.

Development of these National and Wildlife parks have led to an increase in tiger’s population and today, India has 70 percent of the Tiger population in the world.