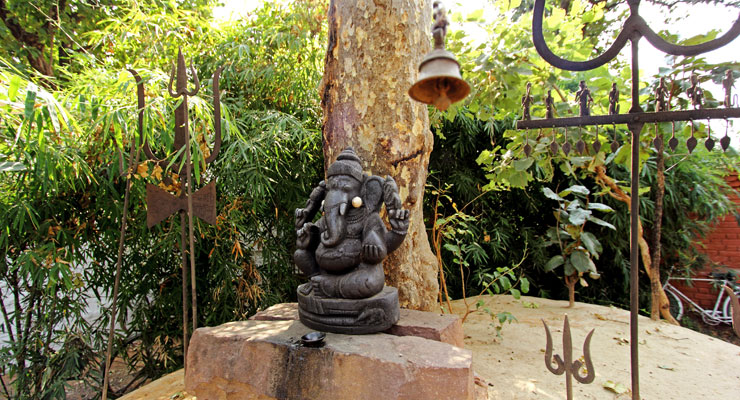 In India, wildlife has always been treated with respect by the four major religions of the subcontinent – the Hindus, the Jains, the Buddhists and the Sikhs. Hinduism gives divine status to animals like the boar and tortoise incarnation of Lord Vishnu, the tiger and lion mounts of the Mother Goddesses, the snakes coiled round the neck of Lord Shiva, the peacock mount of Goddess Lakshmi, the elephant-headed Lord Ganesh, Hanuman of the monkey army, the swan of Goddess Saraswati, among others, and by religious decree many of these animals were protected. Jainism and Buddhism preach non-violence extending to animals. Jain devotees offer food to ants, birds and mammals, and the Jain priests even protect insects by covering their mouths and not wearing footwear. Sects like the Bishnois will not harm antelope or gazelle even when they damage drops. In the 19th century, western naturalists noted that in India there hardly any hunting for amusement, only for food or products, and no animal species was perceived as harmful – even snakes and tigers were protected.

By many tribal groups of western and central India, the tiger was perceived as an immensely powerful living bring that can become fearful and dangerous when provokes, but is not as an unpredictable monster. Some of the tribes worship the tiger and other animals as gods.

At Bandhavgarh, you can see remarkable 1000-year old stone sculpture of Vishnu’s avatars like Narsimha (half-lion), Varah (boar) and tortoise, a shrine to his fish incarnation, and relatively more recent carvings of other deities like Ganesh.